You get your car serviced regularly but have you considered the fact that a regular boiler service might also be a good idea? Just like the car it’s a worry to think that it could stop working at any moment and possibly leave you with a sizeable bill. There are a number of things that can go wrong with the boiler if its not maintained and could cause it to need repair so talking to a Boiler repairs Gloucester company like https://redbridgeandsons.co.uk/heating-systems-gloucestershire/boiler-repairs-gloucester/ can certainly provide you with the help that you might be looking for.  Before we begin telling you about the many issues that can befall the boiler there is one thing that you can do to try and keep the system working smoothly.  It’s been slightly lampooned by television funny man Michael McIntyre but it still needs doing. It is of course the task of bleeding the radiators.

The problem is quite simple, and you’ll soon spot it. The radiator does not get hot, but the boiler seems to be functioning ok. It’s nothing to be too concerned about unless it keeps happening with regularity as it might be an indication of a problem elsewhere. All it is is an air pocket in the radiator. The hot water cannot push the air out of the systems, so you have to give it a helping hand by releasing that pressure via the valve in the radiator. Using the key from your “man draw”, if you remember the sketch, you slowly allow the air to escape. It should make a gently hissing sound before petering out and water starts to leak through instead. The radiator should now make a bit of a gurgling sound as it flows through the radiator. Seal up the valve and all should be well. You’ll soon feel the heat making its way through the whole unit. 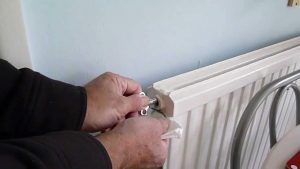 Ok that’s the easy one done. The other causes for the boiler not working are a little bit more complex and should only be attempted by a professional engineer. A very simple problem is that the water pump has gone and needs to be replaced. The water itself might be the problem that’s set that off. If you happen to live in a hard water area, then the water over time starts to silt up parts of the pipes or the pump itself. Limescale is a big issue and there is also general sludge that occurs restricting the flow. One other reason is the if the pilot light keeps going out. There are two possible reasons firstly there is a draught the blows it out and the second is that there is no gas coming in at all. The other is the thermostat is set to high our its damaged and the system cannot regulate itself. You definitely need an engineer for that one or any of the last few problems mentioned.