Safety in our home is paramount, to which we all give priority, especially in those cases in which our family is made up of children, the elderly or who require special care and attention. Therefore, it is important that we keep our house in good condition and safe from certain dangers that can cause both structural and health problems for our family. Here, we explain how to remove bee hive from home.

A very clear example of a security problem in our home is pests. There are a large number of types, but in general we associate them with insects or small mammals that come to our house, which can cause damage to structures or endanger the health of members of our family. One of them is the appearance of a honeycomb or wasp nest. These insects can be very dangerous, especially if a member of the household is sensitive or allergic to their bites. If you have detected a honeycomb in your home, or think that there may be one due to the large presence of wasps.

How to remove bee hive from home?

One of the most recommended is to use fire to kill the honeycomb. It is usually made with an elongated stick or wood, and a cloth soaked in alcohol, diesel or any other highly flammable substance is placed on the tip. Then fire is applied to the wooden point, which appears as a torch and is used so that the fire reaches the nest without having to get too close, whether it is located in a high area or on the ground.

The problem with this method is that we will cause great irritation to the wasps, which will quickly leave the nest due to heat and smoke, and will sting the person or people who are in a nearby radius.

A wasp sting, if you are not allergic, can be bothersome but not serious. But if several wasp stings are suffered simultaneously, even if there is no previous allergy, you should immediately go to a hospital for the consequences that the poison may have on the body. 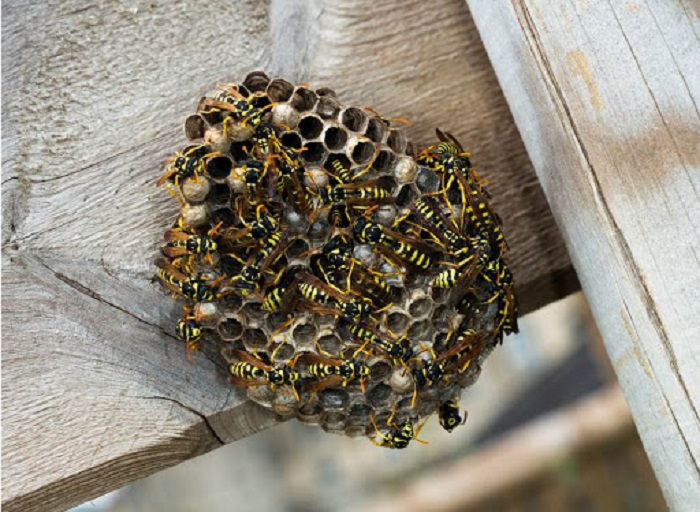 Remove a wasp honeycomb with water

Another way to remove a wasp honeycomb that is also commonly advised, despite being wrong, is to use water. Those people who have a hose or similar device try to wet and flood the nest until it becomes unusable for the wasps.

This method has the same effect as that of fire, that is, it makes them immediately leave the honeycomb, irritated, and attack the people who are nearby. For this reason, we also advise against using this method.

How to remove a wasp nest at home

Our recommendation is that you first go to a pest expert for help or advice on the best method to remove the wasp honeycomb. Most likely, I would advise you to turn to a potent poison.

Before explaining how to do it, we advise that if you have decided to eliminate the wasp nest by yourself, first:

As we have previously mentioned, the least dangerous method you can use to kill a wasp honeycomb at home if you want to do it yourself is poison. The most widely used, and in theory the most effective, is one that contains a pyrethrin or pyrethroid base. We recommend that when you purchase one, it be long-range to avoid having to approach the nest. Also, remember that you will need clothing that protects you from stings when you carry out the honeycomb removal.

When you have everything you need, if you haven’t figured out where the nest or honeycomb is yet, be careful to follow the wasps through the day. At some point, the worker wasps will go to the honeycomb and so you will know their location, but do not act immediately. Usually you will see wasps make their nests on the wall.

Wasp activity is much less during sunset and night, so it returns to the vicinity of the honeycomb at that time. Apply the poison to all areas near the nest, without getting too close to it. The wasps that come out will be impregnated with the insecticide and will put it in the honeycomb, so that all will be poisoned and die.

To remove the nest, wait and make sure all the wasps are dead and that there is no activity around the honeycomb anymore. If you face a nest on the ground, you will only have to cover it well with soil to make it unusable, and if it is in a high area, you can use a stick to make it fall. But whenever you are going to eliminate the honeycomb, remember that although you are sure that the wasps are dead, you must apply the protection measures previously explained.

How to prevent wasps from nesting

If you have already successfully removed the wasp honeycomb and you do not want this situation to recur in your home, you can use certain measures to try to reduce the risk of a nest reappearing, especially in the event that Live in the country or have a fairly large garden area in your home:

Wasp Exterminations: There are wasp traps that you can place around the perimeter of your home and garden to prevent them from going inside and creating a honeycomb.

Keep your home clean: Constantly check all the high areas in your house, in addition to the attic, the attic or the basement if you have these rooms. Remember that you must keep them clean, as well as the roof and the conduits through which water travels outside your home.

See specialists: So they can advise you on the use of certain prevention products, such as nets or mosquito nets to prevent insects from entering your home.

15 beautiful baby shower decorations that you can make yourself

How to clean artificial turf? Step by step guideline

Whats right for you solid or engineered wood flooring?

Proven Tips on how to Succeed Academically in College

How to Polish Gemstones? Step by Step Process